MARY BAKER EDDY, the Discoverer and Founder of Christian Science, tells us in the Manual of The Mother Church (Art. I, Sect. 9), "Without a proper system of government and form of action, nations, individuals, and religion are unprotected." In the world's present state of unrest and confusion, with its conflicting, changing opinions concerning human governments, and in certain parts of the world with deliberate attempts to suppress and even to stamp out all forms of religious worship, we see illustrated the truth of these, our Leader's words.

The Manual sets forth in Rules and By-Laws a system of government which, when rightly understood and practiced, leads to the practical utilization of Christian Science by the individual in all his relationships with his fellow men. Our Leader writes (The First Church of Christ, Scientist, and Miscellany, pp. 246, 247): "The Magna Charta of Christian Science means much, multum in parvo,—all-in-one and one-in-all. It stands for the inalienable, universal rights of men. Essentially democratic, its government is administered by the common consent of the governed, wherein and whereby man governed by his creator is self-governed." 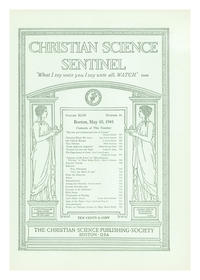