SHALL we, the people of that favored nation,Brought out from Egypt 'neath God's outstretched arm,Saved from the Red Sea's terrifying waters,Kept in the wilderness from threat of harm,Fail to perceive that, here and now, in Science,We have our pillar of the cloud by day,While in the darkest night its shining radianceGuides and protects us all our upward way?Though Israel's prophets wrought great signs and wonders,The veil lay yet upon the nation's heart,And centuries later found them still unableTo bear the truths the Master would impart.But we, who have Christ's final revelation,Have less excuse to falter than had they;The light in this age has been lifted higher,And shadows flee before resistless day.Strong though the claims of evil's vaunted power,High though its walls as Jericho's of old,Subtle its lies, to weaken and mislead us,Through vain idolatry of pride or gold,Yet, 'tis God's angel campeth round about us,His is the voice which bids us rise and seeHistory still is only in the making,Much must be done e'er all mankind is free.Now, as of old, grave issues wait solution,Never the need was greater to be strong,Never more solemn call for consecration,To seal Love's triumph over sin and wrong.Science lifts up a standard for the nations,Compelling men to destinies more grand;May we, Thy people, then, redeem our birthright,Rise from the dust, and gain our promised land! 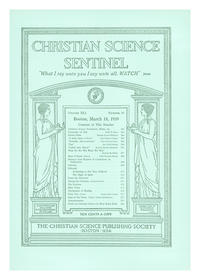