For over fifty years I had been troubled more or less with...

For over fifty years I had been troubled more or less with bowel trouble. Later, this condition became seriously aggravated, requiring the daily use of drugs. Periodically it was necessary to go to a doctor when the drugs failed to produce action. This condition was further complicated and aggravated by a serious accident some nine years ago. I was partially crushed between two heavy rolls of newsprint, suffering internal injuries to the intestinal tract. As the years wore on, the condition was aggravated, and I was subjected to frequent violent illnesses.

Some time later Christian Science was brought to my attention. After reading the Christian Science textbook, "Science and Health with Key to the Scriptures" by Mary Baker Eddy, as well as other authorized literature on Christian Science, I decided to call upon a practitioner for treatment to overcome my difficulty. With some little misgivings I discontinued the medicines I had been taking. I told the practitioner that if healing was not realized in two or three days I might be forced to resort to material means again in order that I might live. He reassured me that God's irresistible healing power is ever present, today. He told me not to worry about the future, but to glory in the present good and in God's healing presence. He told me I might reasonably expect an immediate healing. This I accepted with reservations. 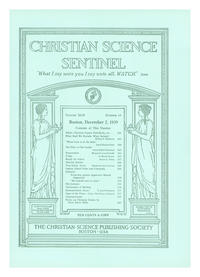