One day, as some Christian Scientists were motoring along a winding road enjoying the scenery, they suddenly became aware that they had lost their way. While searching for the road out of the thickly wooded area, the driver looked up and saw a most welcome sign which indicated the right direction for them to take. When this sign was followed, they were soon again homeward bound.

Through the teachings of Christian Science, as revealed in this age by Mary Baker Eddy, mortals are being shown the way out of all human bondage. It is not God's plan for the man of His creating to be fettered by fleshly ills, since complete freedom is his rightful and natural heritage, yea, his God-given possession. As one becomes willing to be governed by the divine Mind, he may exclaim in the words of a hymn, "My heart is singing: I have found the way." 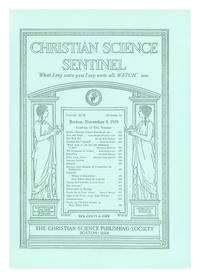