"Sychar, near to the parcel of ground the Jacob gave to his son Joseph" (John 4:5)—Genesis 33:19 informs us that Jacob acquired this ground, on which in the course of his wanderings he had "spread his tent," from "the children of Hamor, Shechem's father," paying for it the sum of "an hundred pieces of money;" and there he erected an altar (verse 20), while in Joshua 24:32 it is confirmed that "it became the inheritance of the children of Joseph."

"Keep that which is committed to thy trust, avoiding profane and vain babblings, and oppositions of science falsely so called" (I Tim. 6:20)—A literal translation would read: "Guard the deposit, turning away from common empty discussion and oppositions of knowledge." It is interesting to note that the Greek word rendered "opposition" is "antithesis"; while "that which is committed to thy trust" represents only two Greek words, which are rendered "the deposit" (or "the security") on the authority of early Greek papyrus manuscripts (see Moulton and Milligan: Vocabulary of the Greek New Testament, pp. 483ff.). Hence Moffatt translates: "Keep the securities of the faith intact: avoid the profane jargon and contradictions of what is falsely called Knowledge.'"

Send a comment to the editors
NEXT IN THIS ISSUE
Testimony of Healing
Although we had studied Christian Science for several... 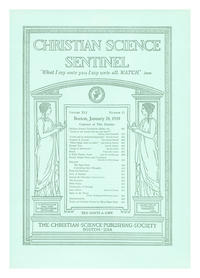