The study and use of Christian Science in my experience...

The study and use of Christian Science in my experience have brought me countless blessings. I had known of and studied Christian Science spasmodically for several years, when it became necessary for me to take my stand for Truth. This was over five years ago, at which time I was suffering from an ailment, the name of which I never knew; but I had great fear of passing on each time I had an attack. One evening, after a very severe attack, a doctor had been called and I had been relieved somewhat from the pain, but the fear still remained. The thought came very clearly to me that I must now take my stand and stick to the truth in which I believed. The next morning I called a practitioner, and I shall never forget the loving and patient work of this practitioner and the kindness expressed during the following two weeks while the healing was taking place.

Then began for me the struggle with self, and the struggle is still going on. But I can, with gratitude, agree with Mrs. Eddy's words in "Miscellaneous Writings" (p. 118), where she states, "Be of good cheer; the warfare with one's self is grand; it gives one plenty of employment, and the divine Principle worketh with you,—and obedience crowns persistent effort with everlasting victory."

Send a comment to the editors
NEXT IN THIS ISSUE
Testimony of Healing
I wish to give this testimony as an expression of but a... 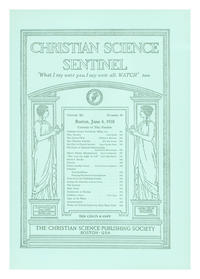