When Jesus sent out his twelve disciples, he instructed them to "heal the sick, cleanse the lepers, raise the dead, cast out devils," as Matthew records in the tenth chapter of his Gospel. He asked them to do what he himself had done. Many times throughout the Gospels definite allusion is made to Jesus' healing of the sick and sinning. To cite but a single reference: in the first chapter of Mark it is set forth that after instantaneously healing Simon's wife's mother of a fever, he healed all that were brought to him, "diseased, and them that were possessed with devils," and "many that were sick of divers diseases."

Christ Jesus healed the sick and sinning through spiritual means; and he expected his disciples to follow his example by applying the teaching he had given them. The New Testament bears witness to the fact that, in a measure, they were successful in this. But surely no one who has perceived that the teaching of the Master was for all men to know, can think that his command to heal through spiritual means was limited to his immediate followers. The spiritual truth he revealed is for all men in all ages. This truth will ever remain as potent in its healing power as when it was demonstrated by Jesus. 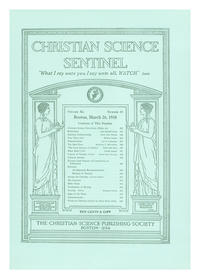