"As in Adam all die, even so in Christ shall all be made alive" (I Cor. 15:22)—According to the context in which it is employed, the Greek preposition "en," here translated "in," can be rendered in various ways, including "by, through, with" (Thayer: Greek Lexicon, pp. 209—213). Thus Murdock, in his rendering of the Syriac Version, has: "For as it was by Adam that all men die, so by the Messiah they all live."

"In the beginning" (Gen. 1:1)—Those early Aramaic paraphrases of the Old Testament, which are commonly known as Targums, provide some interesting suggestions concerning the significance and the translation of the Hebrew phrase usually rendered "in the beginning." For instance, the Targum of Jerusalem renders "in wisdom," and that of Palestine, "at the beginning"; while the Targum of Onkelos sets down a word which may be rendered "in eternity" (see Etheridge: Targums of the Pentateuch, Vol. 1, p. 36).

Send a comment to the editors
NEXT IN THIS ISSUE
Testimony of Healing
With a joyful and grateful heart I should like to tell of... 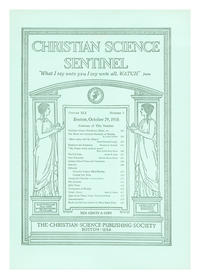