IN Boston, Massachusetts, there stands The Mother Church, "The First Church of Christ, Scientist, our prayer in stone," which, its Founder, Mary Baker Eddy, said, "will be the prophecy fulfilled, the monument upreared, of Christian Science" (Miscellaneous Writings, p. 141). In the comparatively few years since its organization, a great multitude has arisen to testify that The Mother Church fulfills Jesus' promise of a church so firmly founded on recognition of the Christ-power that "the gates of hell shall not prevail against it."

The Mother Church is motherly because it stands for the full revelation in Christian Science of the tender, mighty, unopposed Love that is God. It makes known to humanity the ways of primitive Christianity, the simplicity of soulful living, the rewards of right thinking. Its establishment landmarks for men, women, and children of all nations the inspiring Christliness through which was revealed to a woman's waiting thought the ageless Principle of being. And it speaks of the selfless loyalty to that revelation which impelled her to give to all mankind a church which should proclaim and prove salvation, according to Christian Science. 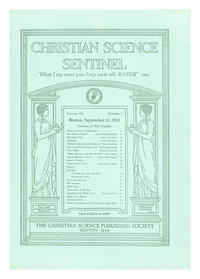