The question of reward for right doing is often regarded as a puzzling one. A man who was not at the time a Christian Scientist, had done many deeds of kindness, had been thoughtful and helpful toward others, and wondered why he should receive so little of the same kind of treatment. He seemed often to meet indifference, and occasionally rebuffs and unkindness from the very ones he had endeavored to help. When he became interested in the study of Christian Science he saw that the true reward for right doing is spiritual, not material.

To material sense, spiritual rewards may seem intangible, but they are plain to faithful followers of Christ Jesus, who himself received so little praise or approval from a world he had come to save from its mistakes and misapprehensions. Jesus was constantly giving, but looked for no earthly reward. Yet spiritually his reward was great, and he often spoke of joy. His final words to his disciples, "yet a little while" before he was to leave them, are found in the fourteenth, fifteenth, and sixteenth chapters of John's Gospel. After telling them of the Father's love, and giving them his commandment to love one another, he said, "These things have I spoken unto you, that my joy might remain in you, and that your joy might be full." Jesus knew that they did not fully understand his words, but he also knew that they would understand them after he had given proof of the Father's ever-sustaining presence throughout his severest trial. 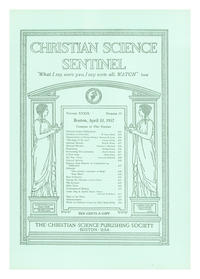