"What a wonderful demonstration!" exclaimed a young student of Christian Science, as he received his grades after an examination period during his first year in college. And indeed it was, for the subject was one which had been particularly difficult for him. However, he had been a student in the Christian Science Sunday School for several years and had been taught to work out his own problems, so far as he was able.

His wise teachers had helped him to lay a firm foundation, and the subject of demonstration had been discussed many times. His attention had been directed to the statement which Mary Baker Eddy, the Discoverer and Founder of Christian Science, makes on page 259 of "Science and Health with Key to the Scriptures," which reads: "The Christlike understanding of scientific being and divine healing includes a perfect Principle and idea,—perfect God and perfect man,—as the basis of thought and demonstration." It had been brought out that the basis of anything is the foundation upon which it is built, the underlying rule which governs it. A demonstration had been shown to be a proof of the truth of a given proposition. He had learned in his study of geometry that he demonstrated or proved the truth of the theorems set forth in his textbook by taking certain logical steps, starting with premises which were already known or had been proved by him, and going on from one theorem to the next in logical sequence.

Send a comment to the editors
NEXT IN THIS ISSUE
Poem
"Peace, be still" 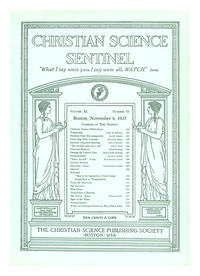