Christian Science takes the tenseness out of work and the laziness out of leisure. It does away with the human belief in overaction and inaction by unfolding the fact of divine Mind's harmonious omniaction. It teaches us that in both work and leisure there should be a sense of resting in eternal Truth and the assurance of unlabored spiritual strength. True thinking is true living. In "The First Church of Christ, Scientist, and Miscellany" (p. 254) Mrs. Eddy writes: "Watch, pray, demonstrate. Released from materialism, you shall run and not be weary, walk and not faint."

Fatigue and restlessness result from ignorance or forget-fulness of the fact that all inspired vision and loving service is traceable to God, infinite Mind. Of anxious toil it is written in Ecclesiastes: "For what hath man of all his labour, and of the vexation of his heart, wherein he hath laboured under the sun? For all his days are sorrows, and his travail grief; yea, his heart taken not rest in the night. This is also vanity." Have not many of us lain awake at night, disturbed by mental pictures and feeling unable to break away from them? This may be due to a lack of spiritual vigilance and fidelity to divine Principle during the daytime. Or it may be due to an undestroyed belief in the unrest of many minds, claiming to be transmitted. Christian Science holds the remedy in either case, and in proportion as we use it, we enter into the rest of spiritual-mindedness. 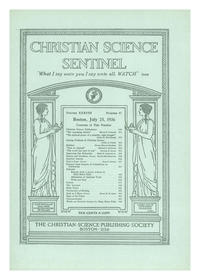