Within the last seventy years a great change has taken place in human thought regarding health and how to preserve it. The change dates from the discovery of Christian Science by Mrs. Eddy in 1866. Up to that time most people believed that the state of the body governed the health of the individual; that if the body were functioning properly there would be good health, if badly, then poor health; and the functioning, whether good or bad, was determined by material law. There were those, no doubt, who discerned the effect of thought on the body, and consequently on health, but they were largely in the minority.

As a close student of the Bible Mrs. Eddy was familiar with the spiritual healings mentioned in its pages, including those wrought by Christ Jesus. She perceived that all of these healings were the result of faith and spiritual understanding. She saw that it was Jesus' knowledge of God and man which enabled him to destroy the errors of material sense, and so restore health; that it was his understanding of spiritual law—God's law—which empowered him to set at naught the seeming activity of what men called material law. She discerned, as did the Master, that erroneous thinking produces inharmonious conditions, including disease; while thinking which is spiritually correct has the opposite effect, namely, that it destroys inharmonious conditions and heals disease. 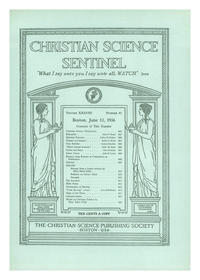