In the Gospel of St. Mark we read Jesus' words, "Whosoever ever of you will be the chiefest, shall be servant of all." And Mary Baker Eddy says of humility (Miscellaneous Writings, p. 356): "This virtue triumphs over the flesh; it is the genius of Christian Science. One can never go up, until one has gone down in his own esteem." To attain humility and go down in our own esteem may often seem to call for much effort, for while the human mind desires praise and achievement, it is loath to go down. Its vain endeavor to parade as intelligence, being built on a false foundation of materiality, is expressed in a false selfhood, belief in which is the chief deterrent to spiritual progress.

Paul grasped the folly of pride and self-exaltation when he wrote to the Galatians, "If a man think himself to be something, when he is nothing, he deceiveth himself." Truly, the false sense of self is nothing; and only as we, through humility, put down all that claims to be a selfhood apart from God can we grasp our true selfhood, at one with the Father. 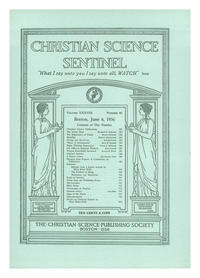