"A Danger besets thy path?—a spiritual behest, in reversion, awaits you." With these forceful and inspiring words in her Message to The Mother Church for 1902 (p. 19) Mrs. Eddy has set for the members of The Mother Church a standard of thought that is capable of reversing error in seemingly serious pitfalls or dangers, and gaining thereby the most significant blessings. This result is bound to occur when one sincerely relies on God, good, and does one's best to reflect Him. The greater the danger, as it would seem to mortal mind, the greater, in reversing it, is the victory of spiritual reliance on divine Mind.

One student of Christian Science had a memorable proof of this when she was forced to turn away from, and give up, a false sense of personal protection, and to turn to God and accept His protection alone. Through this transference of dependence on the human mind, with its fallibilities, to dependence on the infallible divine Mind, which is ever present to save and to sustain, this young student gained a sense of freedom hitherto undreamed of. She learned, at least in part, the deeper meaning of the lines from a hymn, 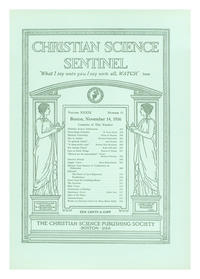