In the Bible there are accounts of the overcoming of difficulties and the solution of problems which were presented to the human mind, and which baffled and perplexed men thousands of years ago. These problems were similar to the problems that today confront not only the individual, but also groups of individuals constituting the membership of branch churches of the Christian Science movement. And the way in which these human problems were met in those days heartens our efforts to overcome the false claims and misrepresentations of mortal mind.

One account in particular that relates the experiences of the children of Israel, when they were being led out of bondage to the Egyptians, bears a striking resemblance to some of the financial problems that today confront members of branch churches. The children of Israel, seeking freedom from servitude to their harsh taskmasters, were faced with the distressing situation of the Red Sea before them, and a pursuing Egyptian army behind them, intent upon their destruction, or, worse still, on bringing them back into servitude to the Egyptian king. 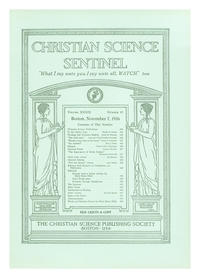