To most people the thought of law implies restriction, when instead we should at least think of law as protection; and as we gain a clearer sense of the infinite Lawgiver, divine Mind, we shall understand that obedience to God's law brings freedom at all times and under all circumstances. In the book of The Acts we read that on one occasion St. Paul was arrested under Roman law, on complaint of his own people; but he was spared the ordeal of scourging when he claimed that he was "free born." In a larger sense and at a later date he gave to his contemporaries, and to the oncoming centuries, the rousing declaration of law and liberty which covers all human need. It is in the eighth chapter of Romans, and reads as follows: "The law of the Spirit of life in Christ Jesus hath made me free from the law of sin and death."

At this point we may remind ourselves that the healing ministry of Christian Science is in accordance with divine law and order, and means the annulment of the asserted laws of disease and death, of want and woe, indeed of all evil. Most people would hesitate to charge directly to God the making of disease laws, but would claim that such asserted laws were nature's laws, as, for instance, in cases of so-called contagion and epidemics. In her "Miscellaneous Writings" (p. 258) Mrs. Eddy says, "In the spiritual Genesis of creation, all law was vested in the Lawgiver, who was a law to Himself." On the next page we read: "Whatever appears to be law, but partakes not of the nature of God, is not law, but is what Jesus declared it, 'a liar, and the father of it.' God is the law of Life, not of death; of health, not of sickness; of good, not of evil." 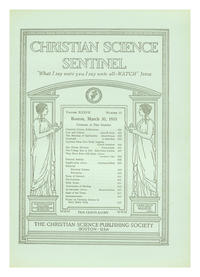