Over fifteen years ago Christian Science was first presented...

Over fifteen years ago Christian Science was first presented to me, and there was much in its teachings that attracted me from the outset. Some surrender, however, had to be made before I could begin to receive the fullness of its message, and for this I was not then ready. Eighteen months later a very swift decision had to be made in regard to a relative who had been operated upon for cancer, but who had relapsed and was declared by the physician to be beyond human help. I then responded to the call to seek the ministrations of Christian Science, and with the faithful work of a practitioner the patient was up and out in three weeks. This healing has proved permanent.

No theological or other scruples could now stand in my way; and ever since that time it has been my daily desire and effort step by step to learn and apply this Science, defined by its Discoverer and Founder, Mrs. Eddy, as "the law of God, the law of good, interpreting and demonstrating the divine Principle and rule of universal harmony" (Rudimental Divine Science, p. 1). Almost immediately, longstanding valvular weakness in the heart disappeared, and I was and am able to endure physical exertion that previously had been nearly impossible; also glasses worn for ten years for astigmatism were laid aside and tobacco given up. The note that was struck in my thinking almost from the first was that Christian Science is the religion of fulfillment. Christian Science answered my questions, dissolved my doubts, and proved itself to be the fulfillment of the promises of olden time. 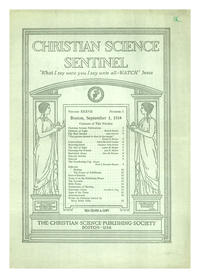