In your October 17 issue you printed an item by a...

Carl W. Gehring, Committee on Publication for the State of Ohio,—Chillicothe

In your October 17 issue you printed an item by a doctor. In describing an interest in Christian Science on the part of orthodox church members as a flight from the church, the doctor misleads your readers, and I request the opportunity to correct such an impression.

This doctor catalogues Christian Science as "cultism" and as "a by-product of this chaotic age." Christian Science was discovered by Mary Baker Eddy in 1866 and, long before the world war, was established as a religion in the United States and around the world. Thousands of people in the present "chaotic age" find Christian Science a source of cheer and comfort and an active agent in the warfare to bring the world back to a state of sanity. A religious movement which has given the world a sane and sound daily newspaper in The Christian Science Monitor can hardly be designated as a "cult" springing from chaotic conditions.

Send a comment to the editors
NEXT IN THIS ISSUE
Article
I regret that your correspondent reads resentment of... 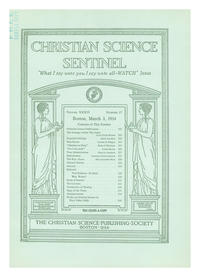