With deep gratitude for Christian Science I wish to give...

With deep gratitude for Christian Science I wish to give the following testimony.

One day while I was crossing a street in a downtown section a motor cycle knocked me unconscious. My first thought when I regained consciousness was to telephone to a practitioner, which I did, though the people in their alarm tried to insist upon my being taken in an ambulance to the hospital. However, I convinced them that I was unhurt and walked alone to the practitioner's office. In one hour's time the fear occasioned by the accident was quelled, and though I sustained a few bruises, the next morning I was back at work.

Send a comment to the editors
NEXT IN THIS ISSUE
Testimony of Healing
When I was nine years old my mother asked for help for... 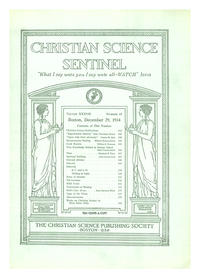