"The household of God"

IT is undoubted that the belief in different nationalities, different races, languages, and customs, has never tended toward the unifying of humanity, nor helped to establish the kingdom of heaven on earth. Rather has it contributed toward separation, misunderstandings, and differences of opinion which more than once have developed into international complications, sometimes with disastrous results. The endorsement or emphasis of these human conditions serves to engender fear and distrust. It thrusts the brotherhood of man into the background, and induces a point of view which regards as aliens the people of any country but one's own.

To some it may perhaps seem natural that, when confronted with a mode of speech and action entirely different from his own, with tendencies and inclinations foreign to his upbringing, the individual should regard as strangers. if not indeed as peculiar, those who so differ from himself. Even from a human standpoint this is a cramped and narrow view. It is proverbial that the more we come to know and understand other nations and peoples, their aims, aspirations, and ideals, their home life, affections, and capacity for loyal friendships, the more we see how much we have in common, and how trivial are the things which seem to separate us. 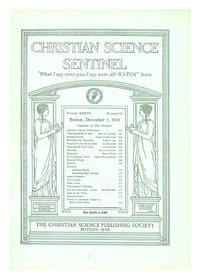