"Ye ask, and receive not, because ye ask amiss." These words of St. James are in harmony with our Lord's utterance as recorded in the sixth chapter of the Gospel according to Matthew, whereby he warned his hearers against employing repetitions which he described as "vain," a word defined in part as meaning "unsatisfying, fruitless, worthless." The Master enjoined those who pray to enter into the closet and close the door; that is, they are to clear their thoughts of worldly suggestions and desires and bring them into direct communion with God. Thereupon he formulated that comprehensive address to his heavenly Father known as the Lord's Prayer, a prayer which has been generally embodied in the forms of Christian worship, prefacing it with the injunction to pray "after this manner."

In the illuminating chapter on prayer in "Science and Health with Key to the Scriptures," the divinely inspired Discovered and Founder of Christian Science sets forth the spiritual sense of the Lord's Prayer, which reveals the unchanging might, majesty, and goodness of God. This spiritual interpretation, which as she says on page 16 of the textbook is comprehended only by rising "above all material sensuousness and sin," needs to be studied and employed in accordance with what Christian Science has revealed of the nature of true prayer. True prayer does not consist of supplications to the Almighty to change His all-wise purposes so as to accord with human desires. Prayers of this latter nature are sheer presumption, since they amount in effect to a claim that the individual knows better than, and can give advice or dictate to, omniscience. Throughout this chapter the wrongfulness of material supplications is emphasized, and it is made clear that true prayer includes heartfelt, understanding affirmations of the eternal Father's unchanging goodness and His love for all His children, and the consequent certainty that He is at all times conscious of their needs and satisfies them in accordance with His unceasing love. Prayer in Christian Science approaches the heavenly Father with fervent gratitude for His unerring wisdom, through which He orders all things for the good of all. This basic fact is unquestioningly accepted by the Christian Scientist, and consequently he logically regards any attempt to persuade the Almighty to depart from His divine purpose and laws as a transgression of the injunction to refrain from asking amiss. 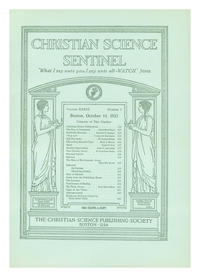