Until the spring of 1917 I knew nothing of interest pertaining...

Until the spring of 1917 I knew nothing of interest pertaining to Christian Science, although I had often heard its teachings ridiculed and had not been backward in doing my bit along this line, even though I had never read any of Mrs. Eddy's writings or the Christian Science periodicals.

One day I was very unexpectedly informed of a healing by Christian Science of one who had been given up to die by the physician. I was very much puzzled over this, so much so that I decided to make a personal investigation of it. That same day I called at the home of the one who had been healed, who was a friend of mine. I do not remember what questions I put, but it was my aim that they should come from all angels, and I kept it up for over an hour. I was at least convinced of the healing, and was determined from that day to investigate Christian Science carefully and honestly. 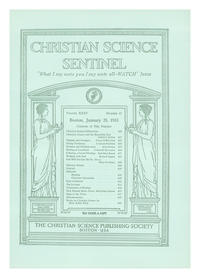