Where Are We Spiritually?

The nature and power of spirituality are plainly stated by Mrs. Eddy in reference to Christ Jesus on page 51 of "Science and Health with Key to the Scriptures." She writes: "Jesus was unselfish. His spirituality separated him from sensuousness, and caused the selfish materialist to hate him; but it was this spirituality which enabled Jesus to heal the sick, cast out evil, and raise the dead." What a striking picture is here drawn of the character of the Master! Unselfish, free from sensuousness or materiality, he was spiritually endowed with the power to heal his suffering fellow men. Sickness, sin, and death were overcome by him through his spirituality.

The question, "Where are we spiritually?" will persist in presenting itself to us. Few there are, surely, who are so blinded by material sense as to be unaware of the precious nature of divine grace. Thoughtful people know how carnalmindedness takes the joy out of life, destroys happiness, undermines health and vitality. How often does the prayer ascend from such afflicted ones to God that they may be freed from it; that the carnal mind, which "is enmity against God," may be replaced by a measure of spirituality with its resultant happiness and health! The first great requisite to spiritual attainment is the desire to be rid of materiality; the second is prayer to God that this shall be brought about. Can we doubt that the prayer will be answered? 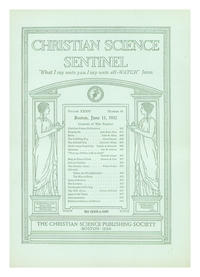