The Business of Exchanging Good

A Cardinal point in Christian Science is that, because there is only one God, there is only one infinite and divine Mind or Soul. This oneness of infinite Spirit is always intact: it has never been subdivided into a multitude of separate so-called human minds or personalities. God makes Himself known to mankind by means of His spiritual ideas. Man, as God's idea, expresses perfectly and continually the qualities of Mind and is governed and controlled by the one infinite Father-Mother, God. One of the errors that underlie all human misery is the false belief that each individual has a limited, matter-inclosed mind or spirit of his own, acting and feeling as an independent self, separate from God, the all-inclusive divine Spirit.

If we believe that God's creation consists of material minds, instead of being composed of individual spiritual ideas, reflecting Mind, we lose the sense of the oneness of Mind and the Science of being. There would seem to be no unified, divine control, but rather a variety of discordant wills, motives, desires, interests, which would cross and interfere with one another. In this erroneous sense of things, whatever one undertakes to do appears to be subject to the influence of many minds, many persons, with their whims and uncertainties. Symbolizing the real creation, the stars and planets, functioning according to law, fulfill their purpose harmoniously. 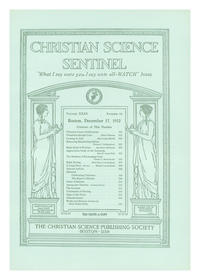