I shall feel obliged for space in which to reply to the...

I shall feel obliged for space in which to reply to the criticisms leveled at Christian Science during the Convocation at Canterbury, as reported in the Newcastle Journal of the 23d instant. One clergyman criticized Christian Science because of its teaching that matter is unreal, which he described as a "fantastic" theory. Christian Science certainly teaches that matter is not real because it is not created by God, Spirit, who is the only creator. But why attack Christian Science for teaching this? Christ Jesus said, "The flesh profiteth nothing;" John said, "The world passeth away, and the lust thereof;" and some of the leading physical scientists of to-day are coming into line with what Christ Jesus said over nineteen hundred years ago.

Send a comment to the editors
NEXT IN THIS ISSUE
Article
In a letter printed on July 22, I endeavored to explain... 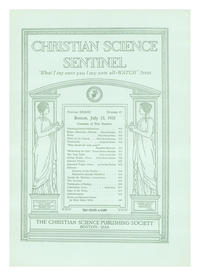