Contrary to the thought of some, the copyright on the last edition of "Science and Health with Key to the Scriptures" by Mary Baker Eddy has not expired. Among copyrights on well-known books expiring in June, this year, is that of the first edition of this book by Mrs. Eddy. "Science and Health" was first published by Mrs. Eddy, then Mrs. Glover, in 1875, and has passed through many editions. It was several times revised by its author, as she explains in the following statement:

"I have revised Science and Health only to give a clearer and fuller expression of its original meaning. Spiritual ideas unfold as we advance. A human perception of divine Science, however limited, must be correct in order to be Science and subject to demonstration. A germ ofinfinite Truth, though least in the kingdom of heaven, is the higher hope on earth, but it will be rejected and reviled until God prepares the soil for the seed. That which when sown bears immortal fruit, enriches mankind only when it is understood,—hence the many reading given the Scriptures, and the requisite revisions of Science and Health with Key to the Scriptures" (Science and Health, p. 361). 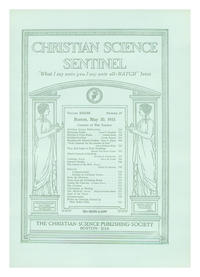