An unsigned article in your columns on November 13,...

Arthur G. Lothgren, Committee on Publication for the Province of British Columbia, Canada,—Vancouver

An unsigned article in your columns on November 13, purporting to be written by a prominent member of the British Columbia College of Physicians and Surgeons, presents such an unjust and unfair attitude toward Christian Scientists that in fairness to them and to your readers I should appreciate an opportunity to make a few statements relative thereto.

The critic accused Christian Scientists of being "self-righteous," saying that "in consequence of this attitude Christian Scientists are frequently found lacking in sympathy for their less fortunate fellows." It is interesting to note the difference between his viewpoint and that of a Bible student, namely, Dr. Lyman P. Powell, rector of an Episcopal church in New York City. Dr. Powell, who is not a Christian Scientist, has recently written a book entitled "Mary Baker Eddy: A Life Size Portrait" (Macmillan), in which he says on page 275, "Even more significant is the large percentage of Christian Scientists who indisputably—as even casual observers testify—bear those fruits of the spirit which St. Paul listed as 'love, joy, peace, longsuffering, gentleness, goodness, faith, meekness, temperance.'" 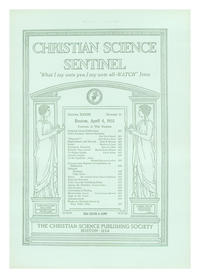