A Student of Christian Science dreamed that she found herself in a village, miles away from her home, whither she had traveled by car. But where she had left her car she could not remember; neither could she even name the village or recall her destination. All was confusion. In the dream she went to a shop to consult a map in the hope of quickening her memory, but to no avail. Just when conditions were reaching a climax and she was accepting the conclusion that she was suffering from loss of memory, she began to awaken; but so real appeared the dream that there was a great desire to return to it and unravel the mystery. How did she get there? Where was she going? Where was the car? A little mental readjustment soon shook off the illusion, and she gratefully realized there was no problem to solve; in fact, nothing had happened, and there was nothing to remember: she had been safe in her own room all the time. Then the weight of anxiety suddenly dropped away.

The next morning while studying the Lesson-Sermon for that week, as given in the Christian Science Quarterly, the student realized that her sleeping dream and the awakening from it were analogous to the mortal dream of existence as material and the awakening to spiritual reality. As Mary Baker Eddy writes in the textbook of Christian Science, "Science and Health with Key to the Scriptures," on page 311: "Through false estimates of soul as dwelling in sense and of mind as dwelling in matter, belief strays into a sense of temporary loss or absence of soul, spiritual truth. This state of error is the mortal dream of life and substance as existent in matter, and is directly opposite to the immortal reality of being."

Send a comment to the editors
NEXT IN THIS ISSUE
Article
Faith, Understanding, Works 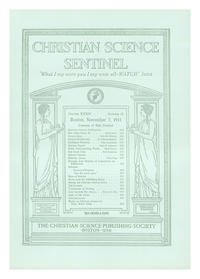