IN the Christian Science textbook, "Science and Health with Key to the Scriptures," Mary Baker Eddy writes (p. 492), "God is Mind, and God is infinite; hence all is Mind." The understanding that there is but one Mind or intelligence, because there is but one God, changes the viewpoint of human thought. It corrects errors of belief about God and man, and reveals spiritual laws and blessings hitherto hidden from human view. To know God as divine Mind is to know man as spiritual and perfect; for a perfect creation must ever be the expression of a perfect creator.

In his parable of the tares, Christ Jesus described the so-called human mind as that state of consciousness in which the tares and wheat, evil and good, seem to commingle. In this parable he also promised eventual freedom from belief in evil, for he taught that the tares should be bound into bundles to be destroyed, and that only the wheat, the true spiritual consciousness, should remain. Our Leader says (ibid., p. 72), "Mortal belief (the material sense of life) and immortal Truth (the spiritual sense) are the tares and the wheat, which are not united by progress, but separated." It is with this process of separation that the student of Christian Science is particularly concerned, for his progress will largely depend upon his ability to distinguish intelligently between good and evil. Christ Jesus cautioned his students of this necessity when he told them to be "wise as serpents, and harmless as doves;" that is to say, they should not only possess purity, as symbolized by the dove, but they should also know what the seeming error claims for itself.

Send a comment to the editors
NEXT IN THIS ISSUE
Article
Opportunities, All 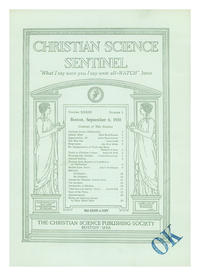