About thirteen years ago Christian Science came to me...

About thirteen years ago Christian Science came to me when I was greatly in need of physical healing. It was necessary for me to do much travelling, and, in accordance with the fear of many who travel, digestive trouble developed. Finally it became very alarming and I suffered four or five severe attacks. These occurred in different cities, where I was attended by various doctors, all of whom diagnosed the ailment differently. However, two of them wanted to operate, one for gallstones and the other for appendicitis. Fortunately, the last attack occurred while I was at home. After I had suffered severely for several days a friend called to see me one night. This friend was a Christian Scientist, and she told me something of this Science. Wishing to know more, I asked where I might secure some reading matter that would tell me more about Christian Science. So this friend and her husband drove to their home, some miles distant, and returned that same night with a copy of "Science and Health with Key to the Scriptures" by Mary Baker Eddy. My wife read the Preface and the first chapter to me that night; then I went to sleep and slept better than I had for months. When I awakened in the morning I was completely healed.

The seeds of Truth were well planted, for the desire to know more about God and man through the study of the Bible and Mrs. Eddy's writings has never left me; and now when I travel the Bible and Science and Health, together with the Christian Science Quarterly, are my nearest companions.

Send a comment to the editors
NEXT IN THIS ISSUE
Testimony of Healing
My gratitude for Christian Science, for what it has done... 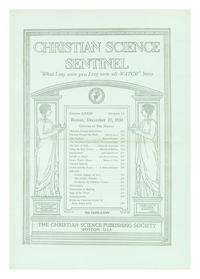