It is with a heart full of gratitude that I give this testimony...

It is with a heart full of gratitude that I give this testimony of the many blessings I have received through the study and understanding of Christian Science. I have had many healings. A number of years ago, before knowing anything of Christian Science, I had what is called "white swelling" in my knee joint, and it left me crippled for some years so that I had to go around on crutches. The doctors told me that if the ligaments of my leg were not cut I would be a cripple for life. I was very much discouraged, as I had two small children to care for and was not able financially to keep any help. But there was an answer to my prayer! Christian Science was presented to me by a dear one who had become a student, and I was willing to try anything that might give me relief. Although I did not use the crutches at this time I suffered from pain a great deal and could not use my leg much. It was but a short time after I took up the study of Christian Science before all pain left me and I could get around and do my own work, as well as large washings for others and some of the farm work, or anything else there was to do, with ease.

I should also like to tell of a healing my little grandson had a short time ago. He came into the house crying and said, "I am very sick." He had a very high fever and was in such pain that if he tried to walk across the floor he would scream. This was about three o'clock in the afternoon. I called a Christian Science practitioner and at eight o'clock the boy said he was feeling fine. The pain and fever had entirely left him and he slept all night without waking up once.

Send a comment to the editors
NEXT IN THIS ISSUE
Testimony of Healing
Remembering the admonition of Christ Jesus, "Whosoever... 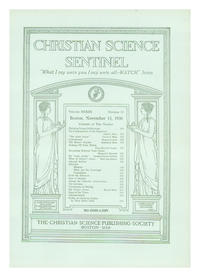