In the foregoing words Christ Jesus expresses the true idea of unity, the unity which exists between God's children, and which all men should strive to demonstrate. At the same time he uncovers the carnal mind's enmity, namely, the world's hatred of Truth directed against this unity. The command that we love one another means vastly more than that we should have the merely personal sense of affection of one mortal towards another mortal, the sense which entertains so-called love towards friends and hatred towards so-called enemies, the personal sense which is deceived by flattery and soft words, which cries, "Peace, peace; when there is no peace," and shuts its eyes to the errors that would divide the followers of Truth. 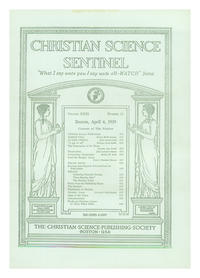