How many times does the students of Christian Science, in his journey from sense to Soul, find himself returning to his Father's house after a sojourn in the "far country." Temporarily off guard, he finds himself feeding on the husks of selfishness, manifested in some phase of lack—lack of supply, lack of health, lack of companionship. And like the prodigal son, as related in the fifteenth chapter of Luke, he awakens to the need of divine Love's protecting care, and hastens to seek the divine guidance that will restore him to his rightful place in spiritual harmony.

His first thoughts upon awakening are perhaps those of self-pity, as he experiences the famine of material sense. Quite unconsciously he may have allowed the suggestions of evil to lead him away from the land of plenty, the kingdom of heaven; and as he remembers how well cared for are those who serve in his Father's house, he is filled with remorse and regret. But with an earnest longing to be shown the way back, he turns from these suggestions of evil, and the ever-presence of divine Love illumines his darkened sense, perhaps through words such as these in Proverbs: "By humility and the fear of the Lord are riches, and honour, and life." Ah, what power has the humble spirit! Humility dissolves the barriers of sense; and as this divine quality comes to human consciousness, the first step toward the Father's house is taken. 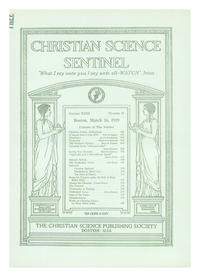