It is reported in your recent issue that at the Church...

It is reported in your recent issue that at the Church of the Good Shepherd, Bungalow Town, a clergyman preached a sermon entitled "Signs in Relation to World Delusions." "Take Christian Science," he says, "it is dangerous in that it professes to hold the doctrines of the Christian faith, but in reality it denies them all." He goes on to make statements which entirely misrepresent the teachings of Christian Science. I should be glad, therefore, if you will allow me to say that far from being one of "Satan's subtle methods of deception" and classed among "false teachers, false prophets, false Christs," as he avers, Christian Scientists are engaged not merely in professing, but in practicing the teachings of the Saviour, Christ Jesus, who preached, healed, and saved nineteen centuries ago on the shores of the Sea of Galilee, who laid down his life in the flesh for the redemption of mankind, and who showed by every sacred incident of his career the way out of the darkness and hopelessness of the beliefs of material existence, into the "glorious liberty of the children of God." There is and can be but the one Christ for Christian Scientists, and this Christ they reverence, honor, obey, and uplift in their lives.

Our critic further says that "Christian Science denies the actual existence of sin, and consequently the need for repentance." Christian Scientists are very wide awake to the need of repentance, for they realize that sin is as actual to them as they make it and no more so; that if the belief in sin is indulged it brings inevitable suffering. They recognize that to the Way-shower, Christ Jesus, sin was not actual, for his attitude toward sin was always to cast it out, to destroy its every claim to place and power, proving it to be a belief without foundation in truth. "Which of you convinceth me of sin?" he said. His unfailing ascendancy over evil, sin, disease, and death was the outcome of his knowledge of the Father and of true sonship, and it is the endeavor of Christian Scientists to gain and utilize that understanding in the destruction of evil, according to his promise, "He that believeth on me, the works that I do shall he do also." The clergyman says that "Christian Science denies the personality of God." In looking away from a corporeal, human concept of Deity, Christian Science enthrones Him as infinite Mind, the only cause and creator. On page 331 of the Christian Science textbook, "Science and Health with Key to the Scriptures," Mrs. Eddy writes, "Life, Truth, and Love constitute the triune Person called God,—that is, the triply divine Principle, Love." And on page 587 of this book she defines "God" as follows: "the great I am; the all-knowing, all-seeing, all-acting, all-wise, all-loving, and eternal; Principle; Mind; Soul; Spirit; Life; Truth; Love; all substance; intelligence."

Send a comment to the editors
NEXT IN THIS ISSUE
Article
May I be allowed space in your paper for some remarks... 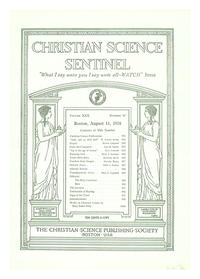