The Door of Heaven

In the fourth chapter of Revelation we read that a door was opened in heaven, and that immediately John was in the spirit. Through long ages, this door of heaven had been unperceived, hidden by the darkness of mortal sense, treated as a mere figure of speech; but at last through Christian Science we are learning, first, that there is in fact such a door; secondly, that it is here, now, ready for each one of us to enter, and thirdly, that it is the only door through which one can become conscious of the things that be, the only door by which one can enter into the realm of the real. Mrs. Eddy writes (The First Church of Christ, Scientist, and Miscellany, p. 188), "Spiritual sense and not the material senses convey all impressions to man." This is a startling announcement. Hitherto the door of the five physical senses had been considered the only opening through which we could become conscious of the world of facts and reality, and at first it seems incredible that these senses show us a world in which there is no more reality than in the world of our night-dreams, or in the fairyland we read of in the tales of our childhood.

Every beginner in Christian Science has had a glimpse through this door of heaven; some ray of health and happiness has reached him, penetrating the mist of material sense. This experience wakes in him a desire to see farther, to gain a full deliverance from the pains, troubles, and disappointments which throng the gloaming and beset his path; but in some cases the progress seems slow. Thus the student is forced to go deeper, and looking about for further instruction he reads once again the well-known words of the Sermon on the Mount. Here he finds the statement that the pure in heart shall see God, and begins to ponder over it. Perhaps having lived in strict accord with the moral code of the world, he has given little heed to these words. He has thought that the injunction here implied made no call for special effort on his part. Yet now he asks himself: Does not this physical weakness or disability from which I fail to get relief show that I have not really grasped the fundamental fact that God is infinite Life and the only Lawgiver? Does not this sense of poverty which presses upon me proceed from a lack of the right understanding of God as infinite Love, our Father and Mother, the Giver of all good? Can it be that in order to see more of God I need to gain more purity? 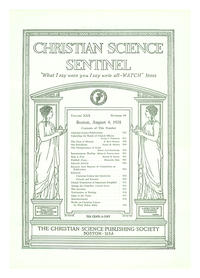