In the Gospels of Matthew, Mark, and Luke we are given three versions, which differ only in the fullness of their corroborating details, of the beautiful and inspiring story of the woman who followed Jesus through the crowd to touch the hem of his garment, and in touching was made whole.

It is a very human story, not unlike those of many Christian Scientists to-day. To mortal seeming, here was one who had been ill for twelve long, weary years, had endured much suffering, had consulted many physicians, and in spite of their best efforts to cure her had grown worse instead of better. She was one of the supposed "incurables" of her day. In addition to this, she was at the end of her financial, as well as her physical, resources. 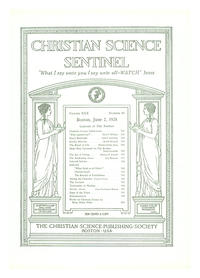