Christian Science teaches the allness and goodness of God, and the consequent nothingness and utter fatuity of evil. The errors which are brought to a Christian Science worker for correction, be they disease, sorrow, sin, lack, injustice, or unemployment, are but different phases of unreality claiming to be a part of God's creation. Furthermore, the solution of these problems, the healing of the different false beliefs, lies in mental and spiritual effort, or prayer which fills human consciousness so completely with the truth that the error, whatever it may have claimed to be, is destroyed and so found to have been an illusion.

Thus reality takes the place of unreality; that is, sickness is displaced by health, want by supply, unemployment by employment, as the case may be. And the one who suffered from the false belief can look back upon the overcoming process as a natural part of his progress Spiritward, in very much the same way as a traveler looks back upon a range of mountains which he has crossed at great effort, to find that they have grown strangely small in the dim distance behind him. While the traveler was approaching those mountains they seemed to loom across his path forbidingly. Perhaps the long road which had stretched before the traveler seemed to end at the base of the mountains. Did doubt whisper to him to turn back? Did love of ease advice him to find a way around? Did procrastination urge that he tarry a day or so before undertaking such an arduous climb? The seasoned traveler heeded not these voices, but pressed on, knowing that through every mountain range, even the most rugged, there is usually a pass. 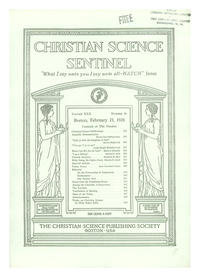