I have been a student of Christian Science for fourteen...

I have been a student of Christian Science for fourteen years. I did not come into it for physical benefits. When I received the light which convinced me that Christ Jesus was the Messiah, good began to come to me in the form of supply. I had been out of work for a year and a half. I got a job; and in one year my pay was raised three times, and I was given a vacation of two weeks. After that my people sent tickets for my family and me to enable us to go to another place, where I got work from another company. While in their employ I broke my leg. Through Christian Science I was up the third day, and in ten days I went to work again.

We have a little daughter who was knocked down by a street car and was thought to be dead, but my wife treated her and she immediately recovered.

Send a comment to the editors
NEXT IN THIS ISSUE
Testimony of Healing
I should like to say how grateful I am to Christian Science... 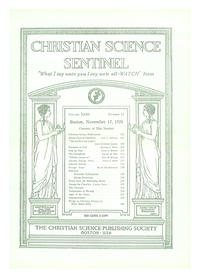