In your recent issue there appeared an account of an address...

Philip King, Committee on Publication for the District of Columbia,—Washington

In your recent issue there appeared an account of an address delivered by the editor of the Journal of the American Medical Association. In the course of his address the doctor was reported as subjecting to satire Christian Science and its Discoverer and Founder, Mary Baker Eddy. He referred to Christian Science as quackery, and said that it largely has its strength in published testimonials and in the charlatans who espouse it. Christian Scientists entertain the highest regard for the earnest efforts made by sincere physicians in behalf of suffering humanity; but the day has passed when Christian Science or Mrs. Eddy can be made the subject of satirical attack with any degree of success. Intelligent readers and thinkers recognize that Mrs. Eddy is an outstanding figure in the history of the world. One proof of this is to be found in the biography of Mark Twain by Albert Bigelow Paine, where Mrs. Eddy is referred to by Mark Twain as "the benefactor of the age," and Christian Science as "humanity's boon."

It is unfortunate that the doctor has not kept as abreast of the times as some of his coworkers, or he would have taken cognizance of the following significant statement made at the annual meeting of the American Medical Society held last summer in this city: "The physician will cut malignant growth from the mind and memory with scalpels of sympathy and compassion as he now removes them from the physical body." Over sixty years ago Mrs. Eddy discovered that all disease is mental, and should therefore be healed mentally. The world is gradually admitting the truth of that discovery. Christian Science is based wholly on the Bible and the teachings of Christ Jesus, who employed no material means in healing the sick, but relied entirely on Mind, or God. On page 106 of "The First Church of Christ, Scientist, and Miscellany" Mrs. Eddy says: "In what sense is the Christian Scientist a charlatan? Is it because he heals the sick without drugs? Our great Exemplar, the Nazarene Prophet, healed through Mind, and commanded his followers to do likewise." It is true that Christian Scientists express their gratitude in testimonials, but Mrs. Eddy also says in "Science and Health with Key to the Scriptures" (p. 3): "Gratitude is much more than a verbal expression of thanks. Action expresses more gratitude than speech."

Send a comment to the editors
NEXT IN THIS ISSUE
Article
I have read the articles on Christian Science which have... 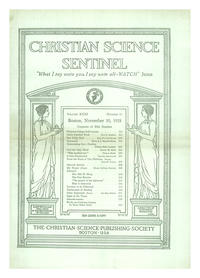