I had been called suddenly from home and had traveled...

I had been called suddenly from home and had traveled all night with a son of six years, who had never heard or talked since he was two years old. Upon arriving at nine in the morning at my destination I went directly to a Christian Science practitioner's office with my son, and after leaving her office we went to a café for lunch. While there I inquired of the proprietor for some light-housekeeping rooms, as I wanted to remain for some time in the city. This lady told me she had rooms near by in her own house for rent, so I decided on one of them. There I left some things, including a small Bible from which I was accustomed to read a great deal to my son, who always came to have me read to him when anything was wrong. We then went out and took a street car to my cousin's about three miles away.

After having a short visit there, I looked about for my son, who had gone outside, but he could not be found. We searched the house and neighborhood, and then notified the police. We also notified the practitioner of the situation. The search was continued until nine o'clock that evening; and after a friend had been to the police station and received no news I again talked to the practitioner, who assured me that my son was resting in God's care and that I should go to bed and rest too. This I did, arising again at six in the morning. In less than half an hour I was informed that the boy had been found and that he was at the restaurant where we had had our lunch the day before, with the lady who had rented us a room. He had reached the restaurant at three o'clock the day before, after walking three miles from my cousin's home over ground he had never before gone over. A policeman came into the restaurant for breakfast and the lady told him about this boy who could not tell them where his mother was. The policeman said, 'That 's the boy they are hunting for." The lady then telephoned and told me that the policeman would bring my son out to me on his motor cycle. He tried to get the boy to come with him, but he cried and wanted to go to our room. They let him go and he ran up to the room and got my Bible, and then came down prepared to go with the policeman; and he was soon restored to my arms with the Bible under his arm.

Send a comment to the editors
NEXT IN THIS ISSUE
Testimony of Healing
Since coming into Christian Science I have received... 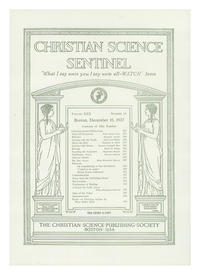