"The miracle of grace"

"The miracle of grace is no miracle to Love." This beautiful assurance is given by the Discoverer and Founder of Christian Science, Mary Baker Eddy, on page 494 of her textbook, "Science and Health with Key to the Scriptures." In the light of this assurance, does it not become clear that the reason why both miracle and grace seem so little understood is that divine Love itself is so little understood in its availability and infinitude? In so far as mere language can define grace, one has rendered fit service. It is, he tells us in part, "the disposition to serve or benefit another; the exercise of love." How rich the thought—"the exercise of love"! Not love passive, dormant, theoretical, but love active; and love active must benefit or serve another: love's labor is never lost. And what were the so-called miracles of the great Nazarene but the exercise of love in supreme degree, the disposition to serve not only another, but all mankind?

None but the student of Christian Science, however, realizes the saving, comforting fullness of Mrs. Eddy's assurance; for her teaching sweeps away all mystery from miracle by revealing the all-creative fatherhood and all-cherishing motherhood of God as divine Principle, and how, through the ever possible and practical demonstration of this Principle, mankind may become conscious of the continously operative oneness of spiritual law—unbreakable, never suspended by Jesus or any of his predecessors or true followers. To quote from the Christian Science textbook again (p. 591), we find "miracle" to be "that which is divinely natural, but must be learned humanly; a phenomenon of Science." Radically different, is it not, from the long accepted mystical, or so-called rational approach to the study of miracle? One fails to see how, without a clear apprehension of miracle, the works—the gracious exercise of the Nazarene's transcendent love—are to be accepted as authentic, to say nothing of their being practical. Yet it is certain that he, the activity of whose love was so effectual as to designate him "the way," pointed ever to his works as the only and unassailable proofs that his doctrine was derived from God, Love, made manifest to man as the Christ, Love's true, perfect idea or reflection. Was it not by such proofs of the Master's and his own emulation of them that the beloved disciple, John, was enabled to grasp the revelation and declare that "God is love"? 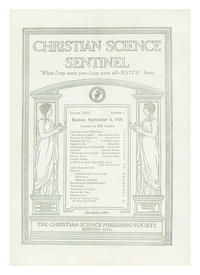