THE earnest and persistent efforts of mortals directed to the acquisition and accumulation of that which is quite generally looked upon as providing a sufficiency for their needs, would be impressive were they not often pathetic. Indeed, the constant struggle for personal possession is frequently carried on with such relentlessness that the indwelling virtues tend all too often to be sacrificed—if such were possible—upon the alter of material aggrandizement.

The belief that material things, or that the circulating mediums of exchange for acquiring them, possess in and of themselves any genuine sufficiency, has ever been a stumblingblock to real spiritual progress. Indeed, this belief has been proved to be a prolific source of enslavement, which, if fostered and indulged, perpetuates such qualities as greed, avarice, envy, and selfishness. 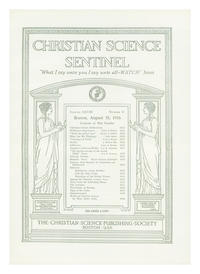