No one who is acquainted with the best literature of this period can fail to see that the world's thinkers are reaching out as never before for a grasp of spiritual things. Christian Science explains this deepest longing of the human heart in its oft-repeated declarations that the real man is not material, but is spiritual; as he must be if we are to accept the Scripture declaration that man is the image and likeness of God. Time was, not so long since either, when religious people thought it presumptuous to claim man's likeness to God in this way, for many believed that God was a corporeal being, seated upon a throne; and reasoning from an erroneous sense of causation they argued that because man seemed to be corporeal, God must of necessity be the same. Slowly but surely, however, the great truth concerning God and man has brought the conviction that man's likeness to God must be, is, spiritual and is so expressed in character. God has never left Himself without witness; and many thinkers in the present age are pleading for spiritualization of thought and life. Many are even pointing out the inconsistencies of a religion which is swayed by materiality, and in consequence that human life seems to present a hopeless picture of absorption in materiality in thought, word, and deed.

Well may Christian Scientists pause ofttimes to ponder the divine command which came to Abraham when he was ninety and nine years old, and which reads, "I am the Almighty God; walk before me, and be thou perfect." As we read this, we are reminded that the same demand is reiterated in the Sermon on the Mount; yet, strange to say, many professing Christians question, if they do not deny, the possibility of obeying this divine requirement. Such a mental state undoubtedly springs from the submergence of human thought in material belief; and in no other way is it possible to obey this demand of divine law except by spiritualization of thought. On pages 355 and 356 of the Christian Science textbook, "Science and Health with Key to the Scriptures," Mrs. Eddy says: "Strangely enough, we ask for material theories in support of spiritual and eternal truths, when the two are so antagonistic that the material thought must become spiritualized before the spiritual fact is attained. So-called material existence affords no evidence of spiritual existence and immortality." 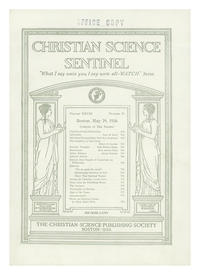