No Limitation, Fear, or Doubt

It would be a truism to say that most students of Christian Science understand intellectually a great deal more than they demonstrate or prove. Our Leader, Mrs. Eddy, writes in the Christian Science textbook, "Science and Health with Key to the Scriptures" (p. 89), "We are all capable of more than we do." Every student is longing to demonstrate more of what his Leader has revealed; so the question arises, Why do we not do more? The Master said plainly, "He that believeth on me, the works that I do shall he do also." We certainly believe on Christ Jesus. It would therefore appear that the reason for the failure to do more is the same as that to which Jesus attributed the failure of the disciples to heal the epileptic—lack of faith. Then, has not the time come when we can cease having so little faith? It is probably still true that some students of Christian Science are almost afraid to expect more than a certain very limited measure of success in their practice or application of the teaching of Christian Science. And is not failure to expect more due to a belief, perhaps all unconscious, that the results depend upon them personally, with God almost left out of the equation?

It would be difficult to find a more simple or more perfect illustration of man's relation to God than that used by Mrs. Eddy when she explains how man is the reflection of God. This is set forth in a remarkable manner on page 515 of Science and Health. It is obvious that the image of a person standing before a mirror cannot initiate or create anything; it cannot do anything unless the person before the mirror does it, and then it repeats that action simultaneously. Comforting, instructive, and encouraging thought, since it eliminates all belief of independent responsibility! Does it not also prevent the possiblity of any sense of conceit, or the belief of one's having personally achieved something? The great and equally humble Nazarene said so simply, "I can of mine own self do nothing;" and, "The Son can do nothing of himself, but what he seeth the Father do." He is the Way-shower. It is therefore our duty as his followers to do the same, to recognize and affirm our at-one-ment with our Father-Mother God. And has not Mrs. Eddy given us the scientific rules whereby this may be done? 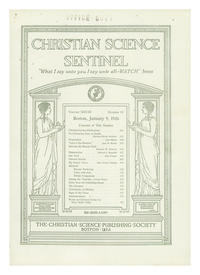