In 1917, when the World War was at its height, I came to the city of New York to await transportation to Europe. My mental and physical state was very low. Fear had gripped me because of the supposed dangers which an ocean trip involved, and because of the uncertainty of the outcome of my contemplated visit to my home. To the fear were added physical weariness and constant pain from a heart trouble of many years' standing, for which relief had been sought through many material means, but to no avail. As I had been brought up in a beautiful Christian home, my father being a minister of the Lutheran church, I had never lost faith in God, although I had no definite concept of Him or where He might be found. My daily prayer during many years had been confined to, "Show me the way."

When I moved from the hotel, where I had stayed for some time, and went into a private home to live, the very first object which attracted my eye was a book, the only book in the room. Glancing at the title page, I read: "The Life of Mary Baker Eddy, by Sibyl Wilbur." I also noticed the words "Christian Science," and put the book down with the thought that it was a book dealing with religion, and I had better leave it alone. Since leaving home many years before, I had wandered from one church to another trying to find that something which I felt was missing in the religion in which I had been brought up, but had almost given up. The same evening, when I was retiring, feeling very despondent and unhappy, evil seeming such a real and unescapable thing, and the pains being very severe, the prayer was offered once more, almost in despair, "Show me the way." Then came the thought, Why not take a look into this book lying on the table; it might at least help you to go to sleep? I had read only a short time when something strange happened. The pain left suddenly; I felt as if a great burden had been lifted from me, and the room seemed flooded with light for a second; and it was as if a voice had spoken the words, "This is the way!" An instantaneous healing had taken place. The next moment I found myself walking up and down the room, filled with an unspeakable joy, repeating over and over, This is the truth, then; man in God's image and likeness never fell, but he exists forever perfect, and evil is not real

Send a comment to the editors
NEXT IN THIS ISSUE
Testimony of Healing
Jesus said, "Come unto me, all ye that labour and are... 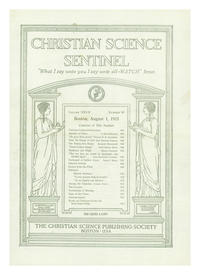