A story is told of a deep valley which was covered by a dense cloud and inhabited by a flock of song birds. But these birds never tried to sing or fly, until one day a little fellow, braver than the rest, by patient effort scrambled up a cliff and pierced the cloud. As he found himself free, a note of joy burst from his throat. Again and again he called to his companions; but some were indifferent to the cry and made no attempt to escape; some tried, but were soon discouraged; while others caught the message and joined their comrade in an upward flight into the ethereal blue, singing their songs of freedom also.

How many to-day valley of human circumstance are under a seeming cloud of sin, sickness, sorrow, or want! Perhaps some need to be aroused to action. Some may be trying to liberate themselves from the thralldom of obligation, necessity, oppression, or from the many woes of sin and sickness by material means, whereas the way out in every case lies in the application of the spiritual law of God. To such, Christian Science comes with the message of deliverance. It proclaims the glorious liberty of the sons of God, and offers freedom from all untoward conditions through the power of right thinking,—the knowing of the truth about God and His creation, man. God is the only creator, it declares. All that He has created is like Himself, spiritual and good. God has created man in His own image and likeness, and has given him dominion—power—over every material circumstance and condition. 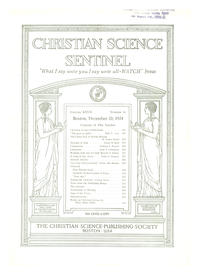