It may be helpful to any one struggling with the confusing belief of poor memory to hear how one student of Science was enabled to overcome this false belief. At the time the demonstration took place, the student was serving on a committee appointed for the special purpose of seeing that strangers were given a welcome at the services, and that they were called upon at their homes and the loving word of fellowship extended to them. As the church was in a university town, the population was to a considerable extent transient; while at certain times of the year there would be an influx of newcomers.

The student of Christian Science found it easy to recall faces, but to remember new names seemed increasingly difficult. Unmindful of the instruction to be found on page 407 of "Science and Health with Key to the Scriptures" by Mary Baker Eddy, "If delusion says, 'I have lost my memory,' contradict it. No faculty of Mind is lost," she complicated the problem by falling into the habit of apologizing for this error instead of correcting it. It often became her duty to introduce church members to these newcomers, and embarrassing situations repeatedly arose. This went on to the point of causing her acute chagrin. There were occasions when the matter could not be carried off lightly; occasions when some shy or formal stranger would be thrust into an extremely awkward position; occasions when some friend whose name was as familiar to the would-be introducer as her own was decidedly astonished or even momentarily provoked at this inexplicable lapse of memory. It finally came to the pass where something had to be done. Constantly reiterated affirmation of the error had induced a state of self-mesmerism. 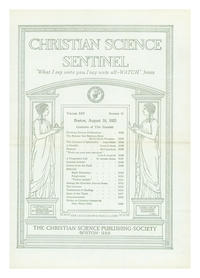