I first learned of Christian Science about twenty years...

I first learned of Christian Science about twenty years ago. Although I did not take up its study at that time I was not antagonistic to its teachings, as I had, several years before, lost all interest in the teachings of the church of which I was then a member. I could not accept the old theory of God and man, in which little was given us of anything except beautiful promises of a heaven which we could not reach except by passing through the ordeal of death. I did not realize at that time what it was for which I was searching, but found, after studying Christian Science, that I was looking for a God who would take care of my present everyday needs as well as of the future. In Christian Science I have found that God is omnipotent, omnipresent, omniscient Life, Truth, and Love, who "healeth all thy diseases."

I did not take up this study actively until several years later, when I was forced to do so by sickness. I was first healed of sciatic rheumatism, and about two years later was healed of a very severe case of muscular rheumatism. The struggle for healing at this time was a long one, but ended in victory, as it always must; for, as our Leader, Mrs. Eddy, says in "Miscellaneous Writings" (p. 118), "Obedience crowns persistent effort with everlasting victory." The material law had been laid down that when the disease reached my heart it would end in death, and I had one attack on the heart before the turning point came. While this healing was slow, it was perfect. I have never had a rheumatic pain since that time, which was about thirteen years ago. Since that period I have had opportunity to test this healing very thoroughly, having been employed at one time for over three years on work which kept me out in the open air all day long and every day in the week. Very often I would come home at night with my clothing wet through, and sometimes frozen stiff around my limbs; but I never had the least indication of a return of the old disease. I have had many other physical healings, for which I am indeed grateful.

Send a comment to the editors
NEXT IN THIS ISSUE
Testimony of Healing
The first proof of the efficacy of Christian Science that... 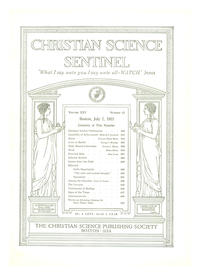