TO those who are just approaching the study of Christian Science, there is, sometimes, a feeling of perplexity over the definitions contained in the Glossary to the textbook, "Science and Health with Key to the Scriptures" by Mary Baker Eddy, the Discoverer and Founder of Christian Science. Two apparently contradictory interpretations are often given to the same word. As the study goes on, however, these definitions become valued guideposts giving clear directions, when the student stands at the crossroads in some valley of decision. It becomes evident that Mrs. Eddy,s interpretation of the Scriptures is wholly spiritual; and Christian Science teaches that for a spiritual idea, or reality, a material lie would, if possible, reverse the statement of Spirit and establish in human consciousness the misstatements of material sense. This is being done continually, throughout all one's earthly experience. In the Glossary there is given the given the spiritual fact, and also the false claim of error which would reverse that fact.

In the study of languages we find that for each of many rules there are often many exceptions, which add not a little to the student's confusion, until the fundamentals are well understood. In studying the new tongue, the language of Spirit, we find there is but one divine Principle, which has one law, and there are no exceptions to that law; mortal mind, that which Paul terms the "carnal mind," is ever claiming to take exceptions, to the law of Spirit. These unauthorized exceptions, these attempted reversals of misrepresentations, Mrs. Eddy has set for our enlightenment, that we may learn in Christian metaphysics to know the real from the unreal, and not be misled into accepting the plausible assertions of the material senses for the pure, authentic utterances of the new tongue. 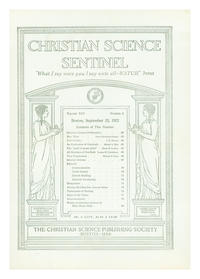